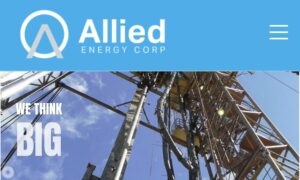 Carrollton, Texas, July 7, 2021, – MCapMediaWire – Allied Energy Corp (OTC Pink: AGYP), an energy company focused on leasing and reworking oil and gas reserves in the most prolific hydrocarbon areas of the United States, is pleased to provide an update regarding progress being made at the Company’s M1 Well at their Green Lease location.

The Company is delighted to inform investors that all the planned work outlined in the Company’s June 17, 2021 press release was completed in a timely and cost-effective manner.

CEO George Montieth commented: “Curtis has been managing our various oil projects with great efficiency and resolve. He is the man on the ground that is planning the work and then working the plan. I am pleased with the time we’ve made up on the Green Lease after battling heavy rains in northern Texas for several weeks. The entire crew is well-aware of surging oil prices and all of us are incentivized to bring wells online and producing this month.”

Beginning in the third week of June, Allied brought a workover rig to Well M1 at the Green Lease site. The rig started out of the hole with combination of 5/8″ and 3/4″ rods. Initially the hole was full with heavy oil cut in the well. The crew pulled pump 1 1/4” x 6’ pump set at 2970’.

After completing this, the tubing was pressure tested to 7000 psi. A few bad joints were discovered and repaired. The M1 Well was circulated for approximately 3 hours until fluid became clear and clean. The roustabout crew also circulated some shale and sand from the Rat hole at the bottom of the well.

The crew then started in hole with an AD-1 packer. The packer was set at 2984’, and rigged up for Flying A Acid. Flying A arrived on location on June 22. The acid truck was rigged up and prepped. The Flying A crew started pumping 750 gallons of 15% NeFe and displacement water. Project Manager Boyles reported that the acid job went very well.

After the acid job was complete the crew opened the well to the tank and flowed spent acid and saltwater. 14 barrels of fluid were unloaded. Then the crew started swabbing and swabbed back approximately 31 barrels of fluid. The crew noticed a good oil cut on final run.

Well M1 is currently ready to begin production. A pumpjack will be installed this week and the Company will have a good idea of barrels per day flow rate later this month. The crew at the Green Lease has currently moved workover operations to Well K-3.

The Company remains committed to providing updates on their corporate website and/or the corporate Twitter page as production progress is achieved.