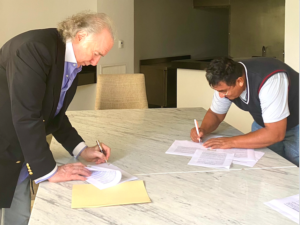 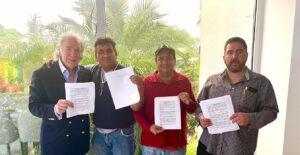 The mine comes with a great history of production, including a large tailing  pond  with a geomembrane, containing up to 10 million tons of material, which would be studied at the same time that the colluvial site would be developed. During this phase, studies would be conducted on the primary hard rock vein structures in the area.  Mr. Petty has agreed to advance the cost of verifying the studies done on the colluvial deposits present  at  the  mine,  as  identified  by  the geologists’ initial visit, and to begin working to reduce the environmental impact of mining the area.

COMSUR, a Bolivian company with several mining operations, was the first company to discover, develop, and exploit a mineral deposit in the Precambrian region on an industrial scale. Thus, the company has become a great source of information on the area surrounding the DHARMA mine. COMSUR previously established environmentally-friendly mining principles  such  as  zero discharge,  which  means  that  effluents  are  not  discharged  from  the  production  process.  Ore is crushed, milled and put in solution, then circulated from water tanks to the processing plant and back. After separating solids from liquids, the water from the dam is recycled back into the plant. Franklin Mining plans to continue implementing processes such as these, which will help protect the fragile ecosystem in the area.

$FMNJ CEO William Petty and the Bolivia Progressa Coopertivas have signed a LOI regarding the Dharma Concession mining area (formerly known as Puquio Norte). The area has a long history of mining according to COMSUR, with an inferred 10 million tons of #gold tailings. pic.twitter.com/Zua8qCJZHc