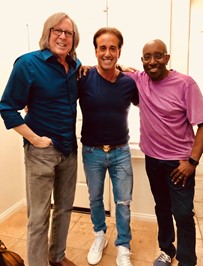 Mike Sherman was privileged to sit down with the two iconic keyboard legends that once played right beside the king of pop for over 10 years.  Mike was on location at Record One Studio in Sherman Oaks California where Michael and his brothers laid down some of the biggest hits of the 70s, 80s and 90s.

This show is filled with incredible behind the scenes footage of Greg and Rory as they perform some of the Jackson‘s and Michael Jackson’s greatest hits on the keyboard and showcase their amazing talent. This explains why Greg and Rory have worked with some of the biggest icons in music such as Stevie Wonder, Aretha Franklin, Barbra Streisand, Eric Clapton and more.

The show will broadcast this Saturday night on the CBS Viacom affiliate WBFS MY 33 Miami. However the show will be re-broadcasted on Universal Media Group‘s new streaming platform, TitanPro Network, available to the entire world sometime this fall.

About Greg Phillinganes: Gregory Arthur Phillinganes (born May 12, 1956) is an American keyboardist, singer-songwriter, and musical director based in Los Angeles, California. A prolific session musician, Phillinganes has contributed the role of keyboards to numerous albums representing a broad array of artists and genres. He has toured with notable artists, such as Stevie Wonder, Eric Clapton, David Gilmour and Toto, served as musical director for Michael Jackson, and has released two solo studio albums.

UMGP is a digital media company with multiple revenue verticals including “Before the Fame”, “On the Mike”, “High School Icon”, and a new NFT Platform in development, as well as an exciting new PODcast.  UMGP attracts some of the biggest names in music, film and sports to participate in our programming. www.umediagroupinc.com